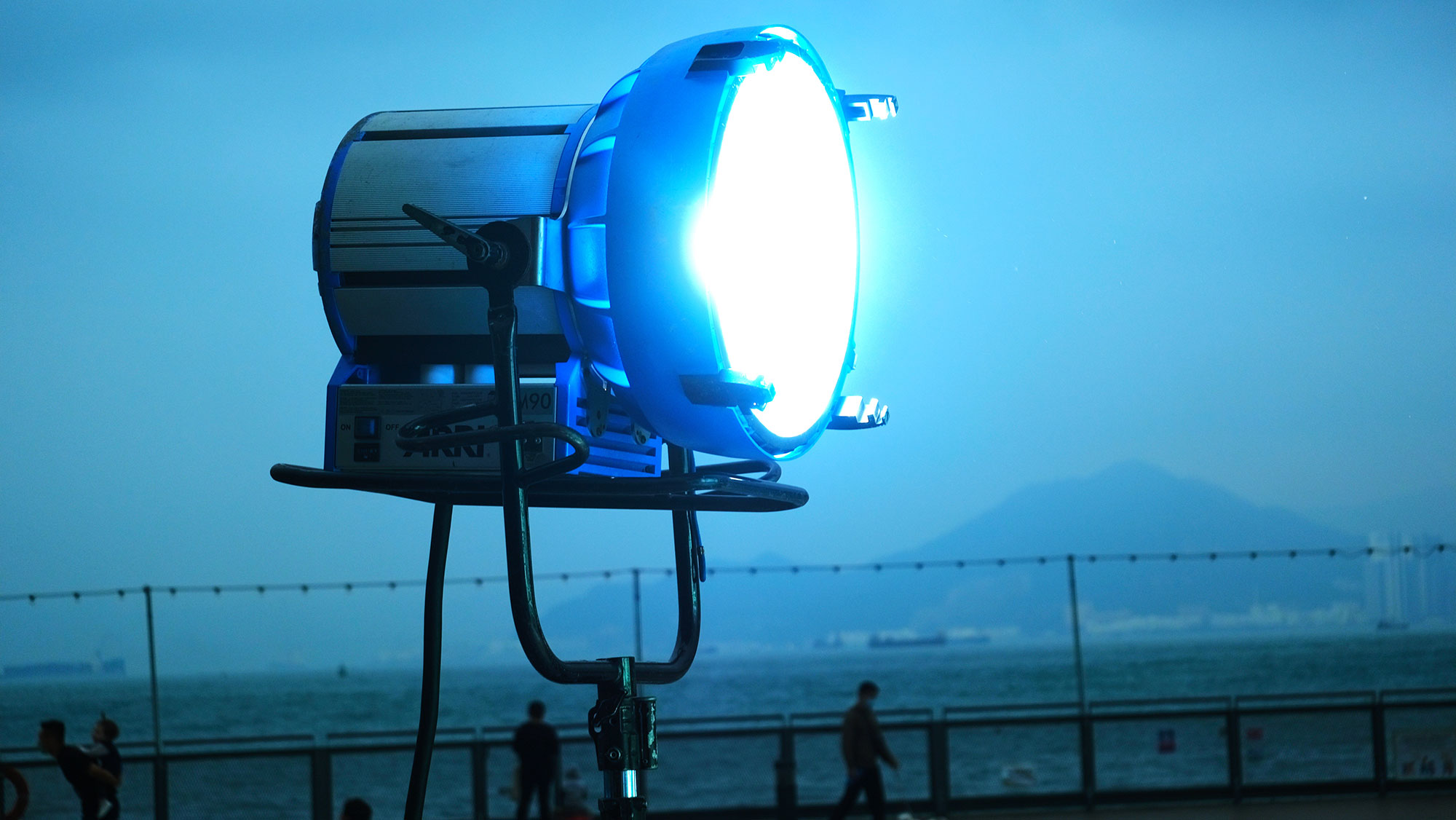 It is darkest under the lighting (intern’s note)

（Lighting equipment that had a luminous intensity）

Hello, my name is K and I am an intern at TYA (HK) Limited. I recently visited the location of a commercial shooting and I am writing a two-part article about it. This time, I would like to focus on the lighting technology that supports the shooting.

Lighting is basically the key to making a subject look good, but in this shoot, I felt that lighting played a very important role due to the characteristics of the building and the style of the commercial.

In this article, I will write about my discoveries related to lighting in the location. Some of them are useful for using lighting effectively in daily life, so I hope you will remember them when you look at lighting.

The proverb, “It is darkest under the lighting,” means that what is important is actually very close by and easy to be missed.

Make it stand out 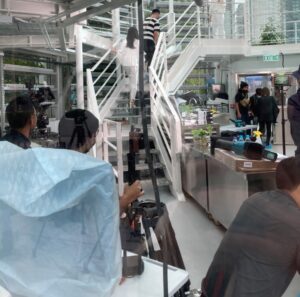 In this shooting, the actor wore white and were staged in sunlight. From the picture, you can see the reflection of light on the clothes of the actor in white at the top and middle of the stairs. At this time, the light was shining from the upper right back of the photo, about as bright as sunlight on a sunny spring day.

Compared to the staff member in the striped T-shirt between the two actors, you can see that the actor’s clothes reflect more light. A bright light source is coming from above and to the side, and by wearing white, which is a reflective color of light, and wearing a silky, glossy fabric, a transparent and refreshing image was created.

The darker parts of a striped T-shirt do not reflect light, nor do the white parts. This is due to the fact that the t-shirt is made of cotton or other matte material, but it looks better in some situations. 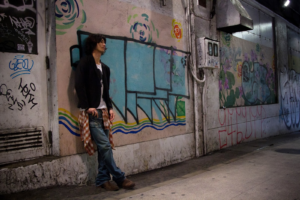 This is a free stock photo. The light source is bright, but it’s generally dark, so there are detailed shadows on the clothes (especially on the jeans), and you can feel the mood from each wrinkle. Of course, the fact that the photo is taken from a closer angle is also a factor in creating this mood. As you can see, wearing clothes made of matte material in a small space and in a generally gloomy environment can create a casualness and coziness.

The diffuser like the one in the photo is often seen not only in this case but also in other photo shoots. 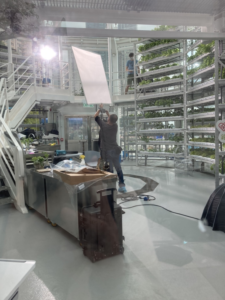 By passing through the cloth once before the light reaches the subject from the body of the light, the light will come from the rough surface of the cloth instead of the smooth surface of the light, and shadows that are not clear will appear. In addition to shadows, bright parts that reflect light (such as a person’s cheeks) also become vaguely bright. Light with little difference between bright and dark parts is soft and gentle.

Light travels straight. While the surface of a light body is smooth to a certain extent and only emits light in a certain direction, the surface of a cloth has many bumps, so the light disperses in all directions and is reflected everywhere in the room. Then, the light that reaches the subject becomes visible. As a result, the difference between bright and dark areas becomes smaller.

Some of us may have taken pictures at a photo studio using an umbrella with a white inside. The umbrella also reflects the light from the camera’s strobe or other light, so that less light gathers in bright areas and more light gathers in dark areas than simply using a strobe. 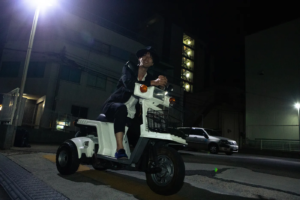 This is another stock photo. This photo was taken on the street, and you can see that the shadows are clear and there is a significant contrast between light and dark. In contrast to the previous photo, when you want to create a cool impression of a machine or a unique atmosphere at night, it is preferable to have the light of the source shining directly, and the light and dark areas are distinct. 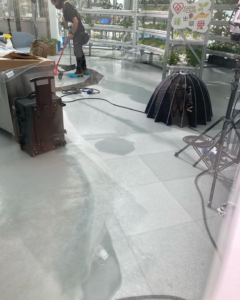 Here is a picture of the floor at the shooting location. It was actually cloudy at the time, but the lighting from the back of the room makes it look like sunny. Notice the leaves of the plant on the right side. The leaves in the lit area look fresh and yellowish green. 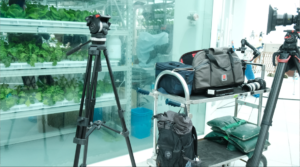 Why was it possible to use artificial light to create an expression more like sunlight than real sunlight?
Let’s consider the opposite pattern in solving this problem. Have you ever placed a houseplant in an artificially lit room and felt it was less alive than the plant outside? This phenomenon is related to the difference between sunlight and artificial light. I will not go into the details, but even a single ray of light contains many different colors of light. White light, in fact, appears white because of the mixture of many different colors of light such as purple, blue, yellow, and red.

LED light and sunlight contain different proportions of each color. In general, LED light contains more blue than sunlight, even though they are the same white light.

What was shining more like sunlight than the sunlight at the time of the shooting was actually a special light body that was not LED. 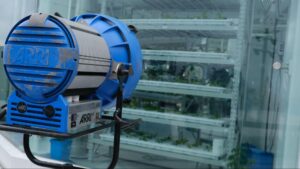 This light is a model M-Series M90 from ARRI. This light has various features, such as a reflector (the part of the light that looks like a mirror and amplifies the light) that is 1.5 times more powerful than other types, but the first feature is that it is an HMI light.

HMI light is an abbreviation for Hydrargyrum Medium-Arc Iodide. It is a light whose system is different from that of incandescent bulbs and LEDs. The color balance of the light is almost the same as that of sunlight, and it is said to be a “portable sun”. It is also used in baseball stadiums and gymnasiums because of its extremely high intensity.

HMI lights are more expensive than others, but very useful. This was the reason why they could replicate sunlight better than reality. 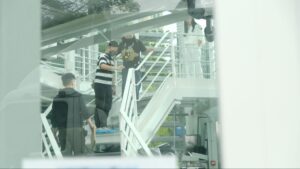 Here is a picture of the shooting location. Even without any particular comment, you can see that there are two staff members. The reason is that they wear black.

In Japanese, people who work behind the scenes are often called “kuroko” or “kurogo. This is because in traditional Japanese performance such as Kabuki, there is a rule that anyone wearing black is not supposed to be on the stage, so the backstage staff would appear on stage in black to hand out props and help actors. However, not only here in Hong Kong, but also in other countries outside Japan, it is standard for backstage staff to wear black.

What are the reasons why people behind the scenes wear black? I have personally been involved in production, so I will introduce the reasons, including what was told at that time.

①To minimize the impact on the subject

As I have written, white color reflects light. A white reflector is sometimes used in studios to brighten up faces, but conversely, white clothing can make the subject brighter than necessary. This is the same reason as why equipment such as cameras and tripods are black. If you are taking pictures of people outdoors, white clothes can be used as a reflector.

②To eliminate the sense of life

Black has the effect of making things appear smaller than they are. You’ve probably heard that wearing black clothes makes you look thinner. Since black things look smaller and less conspicuous, they wear black clothes in order not to ruin the atmosphere of the stage or scene. From the actors’ point of view, the black clothes of all the staff, not only behind but also beside and above the camera, make less pressure.

This is of course the biggest reason. As seen in judges’ court uniforms and suits, dark colors have an intellectual image and are appropriate for highly specialized backstage staff.  Taking this commercial shooting as an example, there were a lot of people coming to the location, including the actors, their managers, advertising companies like TYA, client of the commercial, and the general public since the shooting was in a public place. By having the behind-the-scenes staff wearing black, they could immediately ask for help each other members in case of equipment trouble or quick removal.

This time, I focused on the lighting, but through visiting the commercial shooting, I learned that it takes more than two months of time, 30 people, countless cameras and lighting equipment, and a lot of patience to make a good commercial, even if the commercial itself is less than a minute.

Thank you for your reading.

It is darkest under the lighting (intern’s note)